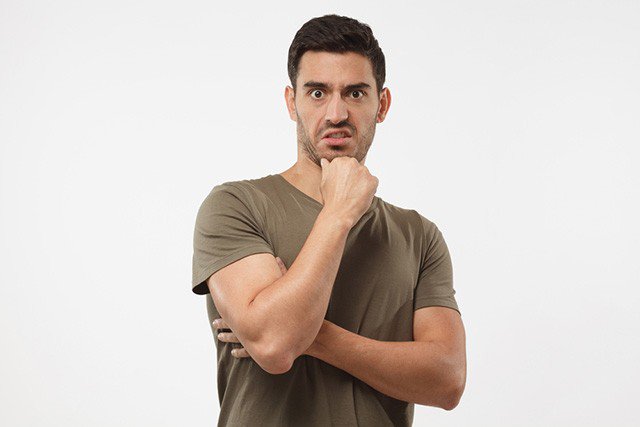 We know that it’s difficult to be a woman. The high heels, the leg-shaving, the period cramps, the pain of childbirth — they seem to get the short end of the stick at almost every turn. But in that discussion, it often gets forgotten that being a man isn’t a total walk in a sun-dappled park, either.

We have our own set of problems and vulnerabilities, some small — even funny — and others large and painful. We also live with the constant expectation to be strong and to keep our issues to ourselves.

So without further ado, here are 10 of the most annoying things about being a man.

Hair. Hair everywhere. On your neck. Down your back. On your chest and stomach. It varies from man to man, and, hey, some of it can be attractive or serve a purpose. The hair under your arms wicks sweat effectively. But what purpose do the hair on your feet or knuckles serve, and why do some men have small bushes of hair coming out of their ears? Even waking up early every morning to shave your beard in some desperate attempt not to look like a hobo or an alcoholic can rankle the most stoic of men. Oh, and lest we forget: One word, my friend. Manscaping.

One of life’s cruel ironies is that when you’re young and virile and pitching tents at every glimpse of bare skin — say, in high school math class — you’re less likely to be able to enjoy your virility. When you’re older and more established, more likely to have options, even something as routine as “getting it up” can be a problem. Now that’s a cruel irony.

Testicles Getting In The Way

Rare is the moment in the average man’s life when he can forget that he has a pair of balls dangling between his legs. If you own a laptop, you’ve probably wondered if having it on your lap will cook your sperm and lower your fertility. And you’ve definitely agonized over whether to go boxers or briefs.

When it comes to sex, the pressure is disproportionately on the man to perform. To begin with, he has to get it up, which is something heavily dependent on his level of attraction to the woman, his comfort, his health and, not least of all, his sobriety. So when we do, and it’s happening, why is it only our fault if it’s bad? Shocker alert: Women can be bad at sex, too.

Mistaken For A Pedophile

God forbid a father wants to walk hand-in-hand with his son or daughter, or take his child to the playground to play with other children. There is a culture of hysteria surrounding men and children that has made men afraid to be physical, to pick up, hug and cuddle their own kids for fear of being mistaken for a pedophile. That’s just not fair.

Condoms help prevent pregnancy and the spread of STDs. They also suck. A lot. They’re a hassle to buy in the appropriate size, they’re often difficult to put on, going through the process of opening the package tends to be a mood killer, and, obviously, they dampen the sensation significantly. And yet still, we use them — because in many cases, the alternatives are way worse.

Getting Called A Creep By Women

However much social mores have changed in the last 50 years, for the most part, the onus is still on men to approach women in romantic situations. If we don’t say hello to a total stranger who happens to catch our eye, she definitely won’t. And in that brief interaction, in a bar or club or coffee shop, things can go horribly, horribly wrong. The end result of your failed approach might mean the dreaded “creep” label (variants include “creeper” and “weirdo”), and nothing quite hurts a man’s pride, or his chances of approaching another woman, quite like being so negatively labeled.

When it comes to fighting, there’s a terrible double standard at play. We are expected by society not to fight, to keep calm and find a non-violent resolution to conflict. But when the local bar bully is insulting your honor, or, worse, that of your girlfriend, there’s an expectation from many people that you entertain his entreaties to engage in some fisticuff-trading rather than slink away. When confronted with this situation, a man has two choices: fight and be considered a violent neanderthal, or don’t fight and be considered a wuss.

Getting Slapped In The Face

There’s one act of physical violence that gets used with alarming frequency: Men getting slapped in the face. When you see a woman slap a man on the street, chances are you didn’t think to yourself how awful it is that she resorted to violence; instead, you probably wonder what he did to deserve it. It’s another double standard. Hitting someone isn’t a solution no matter which partner is doing it, but the slap is much more accepted if a woman does it.

The Pain Of Getting Hit In the Groin

It happens in a split second and only lasts a few minutes at most, but those few minutes are filled with excruciating pain, cursing and the fleeting thought that maybe you’ve finally taken one too many shots to the groin to be able to have children.

Celebs and their fashionable tattoos