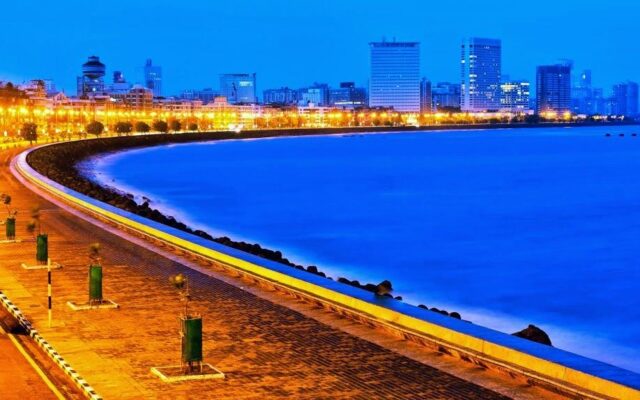 If there is any city in India which can boast of being really cosmopolitan in the true sense of the word, it is our good old “BOMBAY “ which was renamed as “MUMBAI” a few years back.

This City is amazingly unique in several ways and has got a magnetism like none other. Some call it“MAYA NAGRI” (city of wealth) and others call it “City of Dreams” ( sapnokinagri). For Locals it is Amchi Mumbai (Our Mumbai) and everybody knows it as “ City which never sleeps” and “The Most Happening Place”.

Every day hundreds of people come here for jobs, education, set up businesses, and many with dream to make it big in “Bollywood” !! The City welcomes everyone with open arms and gives a chance to fulfill his dreams. There is something in this City which no other City in the world has in it. One has to experience it because words probably cannot truly describe it !! However, I will try to give a little taste of this amazing city in a couple of blogs …

Mumbai, which is still called and known by many by its earlier name “Bombay”, got itsname from the temple located here called Mumba Devi ( temple of Godess Kali). Originally, It was a combination of seven islands and it took 60 years to merge these Islands into one, between the years 1784 to 1845.

Erstwhile “Bombay” was not part of British Empire, but was given as dowry by the Portuguese, when Princess Braganza married Charles II of England.

Let us talk about some more not so well known facts about this City.

Mumbai is the Financial, Commercial and Entertainment Capital of India. The Bombay Stock Exchange (BSE), National Stock Exchange (NSE), SEBI, Reserve Bank of India (RBI), Headquarters of all major Banks and Financial Institutions, Corporate and registered offices of Top Most Industries, several most famous and prestigious Film and TV Studios, are all located here. In my stay of around sixteen years in this city, I have not seen a “Power Cut”, not even a single day barring stray incidents of some local electrical faults, which were always rectified in a couple of hours at the most. Having earlier, lived in quite a few cites and towns and travelled almost all corners of India, I have not seen another place which can boast of a better record in terms of Power Supply.

“This City never sleeps”… and the saying is so very appropriate!! One of the major reasons contributing to that is the fact Mumbai is the Hub of Hindi Film Industry popularly known as “Bollywood” and Television Industry which work almost round the clock. Bollywood produces largest number of films in the world an estimated 1000 movies annually !!One of the oldest and the most prestigious Cinema Theater, Maratha Mandir has been screening the movie “D D L J” starring Shahrukh Khan and Kajol for more than twenty years continuously with packed houses. Where else in the world will you find such Obsession for Cinema ?

The influence of Bollywood is very much “Visible” all around the city. The dance and acting academies/classes can be seen in every other locality. Parents of aspiring teenagers and even 7-8 years olds, encourage their children to join these institutions with a hope to make it big in Bollywood/TV/Theatre one day in future.

Recently I happened to visit a Voice Academy called “VIVA Voice Academy” where the voice modulation, the art of using your voice is taught to improve your performance in any profession, especially useful in Cinema and TV Industry; and personal life ! The students of this Academy come from all walks of life.

The local trains, popularly known as the “Life line of Mumbai” start as early as 4 am in the morning and the last train is available at 1.30 am at midnight !! 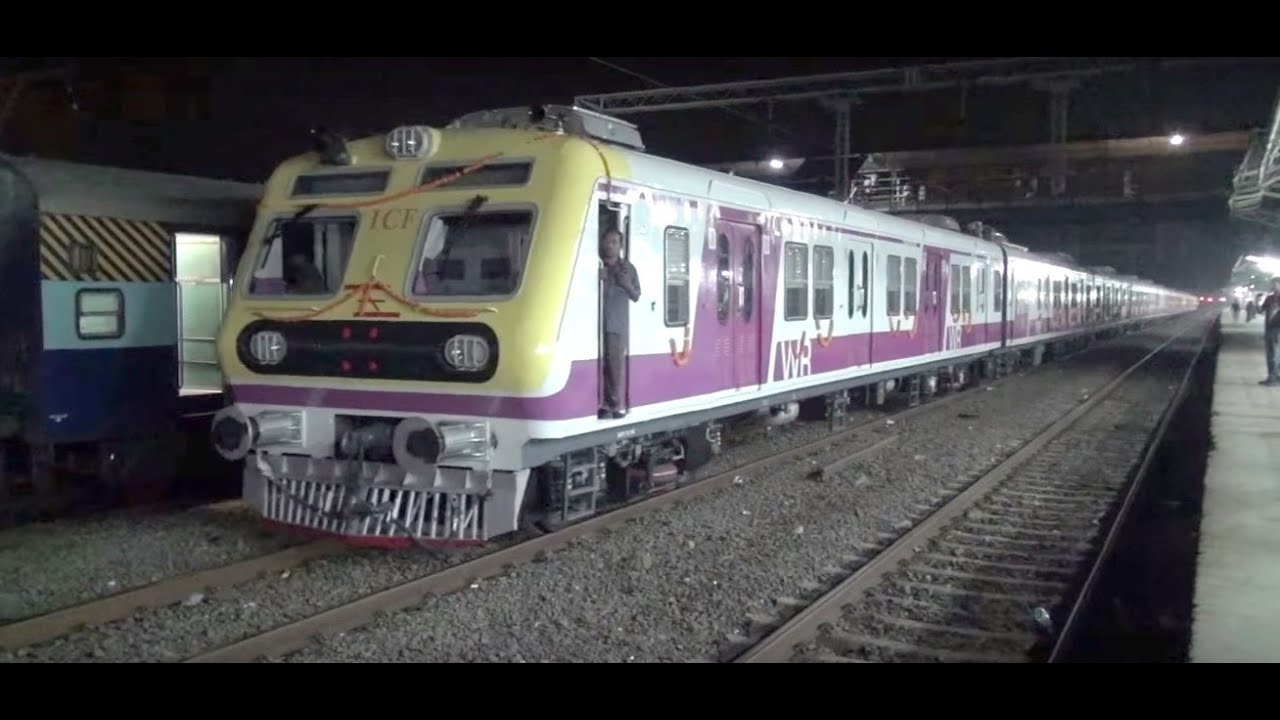 As per estimates, around 72 lakh Commuters travel by these local trains everyday. One has to travel during peak hours to get a real taste of travel in these trains. The Ladies Coaches turn into Portable kitchens in the evening rush hour,with ladies peeling vegetables, the coaches also turn into mobile shopping centers as one can see hawkers selling combs, footwear, fancy hair clips, and even make up kits at throwaway prices !!

The General compartments both second as well as first class are so tightly packed that however itchy you may feel, you cannot scratch your head or any part of your body as it becomes impossible to move your hand. If you board a train in the morning around 8 am from western suburbs to Churchgate , you can get all the Share Market tips for the day from the familiar group of Stock Brokers/dealers. If a fan is not working and you feel suffocated, never mind, Mumbaikars have the  knack of being very creative on such occasions, you will spot a young man taking out a comb from his pocket and move the fan blades with it and in no time you will see the fan moving with great speed and that’s almost a routine !! The sight of people doing meditation or some acts of Yoga and some having a good nap while standing, in the jam-packed locals running at high speeds, is not uncommon !!

The Mumbai Locals have taught the Mumbaikars the value of every second. I have observed for more than ten years, the fast trains leaving Churchgate station for Borivali in the evening at 5.54 P.M; 5.57 PM,  and 6.00 PM, have been punctual to the last second, barring exceptional circumstances like flooding of tracks once in a while during Monsoon. People can be seen literally running lest they miss their particular train which, otherwise, would delay their arrival home by quite some time due to the chain reaction!! And while running to catch the train, it is usual to collide with another person as the rush during peak hours is breath-taking. However, nobody has the time to even turn and see whether you collided with a man or woman, young or old, no question about anyone complaining or picking up a quarrel or for that anyone saying sorry to the other only because that would consume a few seconds which may become the reason to miss their trains.

The Auto Wallas in Mumbai are humble and honest. They will turn their meters down even before you settle down in the Auto and tell him the destination. The traffic is generally disciplined and the drivers follow the lanes traffic rules strictly. If you are in a hurry and tell the Auto Rickshaw driver to move fast more than once, don’t be surprised if he stops the Auto and tell you to hire another vehicle !! I have not come across a single incident of serious road rage in the last sixteen years of my stay. If there is any issue between the two drivers, they may give a dirty look, shout at each other, at the most, without getting down from their respective vehicles and invariably the windows of the cars still remain closed during such altercations.There might have been stray incidents but considering the huge population and corresponding traffic, they become insignificant.

The word “Eve Teasing” does not exist in the dictionary of Mumbaikars. The fairer sex can walk alone anywhere even at 1 a.m, without looking around and hire a Auto/Cab fearlessly round the clock.

You can witness young as well as not so young couples enjoying their romantic moments at popular Spots like Gateway of India, Marine Drive, Juhu Beach, Girgaon Chaupatty, Bandra Band Stand,Worli Sea Face, and Carter Road, well past midnight and no passerby would bother to give them a second look (or for that matter first look) and the couples won’t bother any bit about the surrounding people anyway and continue to be in their own “Starry World” talking “Sweet Nothings” for hours! One can find traffic jams even at midnight, at 12.30 or 1 am, at particular points but then it is certainly a better situation in comparison to the empty, dark roads where women dare not move out alone even at 8 pm in other places like in NCR and neighboring states.

Mumbai’s night life is worth experiencing. Intimate and Trendy Bars for the middle and upper middle class, High Class lounges for the Elite Class  and Community dances of fishermen on the famous Tunes of ” Original Local Koli” Community makes sure that there something for everybody almost throughout the  night !!

Mumbai is known for its liberal and non interfering culture unlike most other parts of the country.

The spirit of united Mumbaikarsis truly visible during times of need; be it the natural calamities like the floods due to extremely heavy rain on 26th July, 2005 or the terror attacks on the city on 26/11/ 2008, every citizen was seen helping the victims/affected people, irrespective of religion, caste, class and gender. Mumbaikar’s urge to help the needy on such occasions is just amazing !!

To get the real taste of this amazing city, one must stay here for at least a few months if not a few years.

My mother and grandmother used to tell me a saying in Punjabi for the city of Lahore (now in Pakistan), which was part of the undivided India before Independence…..which goes like this “ Jinne Lahore NaiVekhya, Oh Jamya hi Nai”, which means “ The One  who has not seen Lahore, is CONSIDERED as NOT BORN”. I am tempted to rephrase it as “Jinne Bombay naiVekhya, Oh Jamya Hi Nai”……..”.Those of you, who have not seen Mumbai, are CONSIDERED NOT BORN” !!

Kind Things You Should Do Today