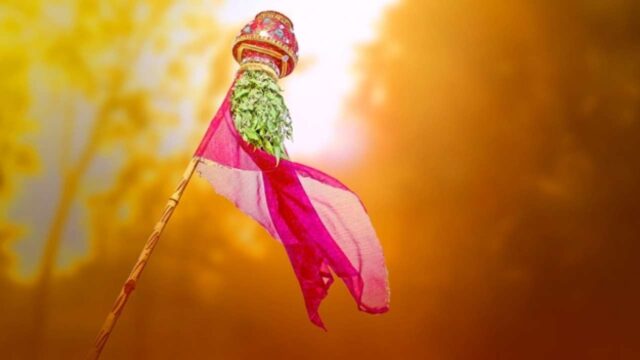 The Holy festival marks the beginning of a New Year in the states of Maharashtra which marks the beginning of the New Year, new month and new day for Hindus. Celebrated on the first day of the Chaitra month and in the states of Karnataka and Andhra Pradesh is is better known as Yugaadi (Ugadi). It is said that it was on this day that the Universe of created by Lord Brahma. The day includes an auspicious bath, decorations on the door with a toran (garlands), performing some rituals and also hoisting the Gudhi (flag) or Dharma Dhwaj.

The word Padwa has its derivation from two syllables- Pad and Vaa. Pad means maturity and the walk towards perfection while Vaa means growth.

Once the entire picture of the Universe is ready after deity Brahma’s creation, it is known as pad. With time, changes were made and additions were done in order to make the Universe better and an idea one. This, his day of creating the perfect Universe is called padva. With the hoisting of the DharmaDhwaj, the day began to be known as Gudi Padwa.

A long followed ritual on this day is making a paste which includes Neem leaves, tamarind, jaggery and salt. The festival begins after having this paste.

Harvest Festival
Gudi Padwa is known to be the festival of harvest. India being an agricultural country, festivals are often related to the beginning and ending of many such agricultural seasons. The Gudi Padwa marks the ending of Rabi season.

The celebration on Gudi Padwa Festival revolves around the well being and prosperity of all. Decorations are made with bright and vibrant things and people wear traditional clothes on this day. Sweets form a major part of any festival and gifts are as well exchanged amongst friends and family. Not to forget, it includes feasts at various places as people celebrate with relatives and friends.

Similar to what happens on Diwali, homes are cleaned and unwanted items are thrown away. Many also get their houses painted and decorate the gates with mango leaves. People visit the temples to seek blessings and the hoisting of DharmaDhwaj is a major significance of Gudi Padwa. The flag is also known as Brhamadhvaj (The flag of Brahma, the creator). House are decorated with rangolis and various dishes are made.

The custom of making ‘puran-puris’ has been existing since many years and people visit each other in order to greet them! Phone calls are made to distinct relatives and celebrations are at its peak!

A very happy and prosperous Gudi Padwa to all