The younger generation is the storehouse of creative spirit and given an opportunity, they will shine brightly in the vast sky of innovative possibilities. Dubai witnessed one of the biggest events for creative young minds last week. The event that sparked the interest of the entire GCC happened on the 4th, 5th, and 6th of November 2022 at De Montfort University. The Annual Student Art Show by Funun Arts, Youth Creative Minds and De Montfort University was exclusive in many respects which included an incredible number of participants, 600 attendees including 350 participants from 40 nationalities. The objective of the event was to bring young and creative people on a single platform and give them a chance to showcase their creativity on any one goal of sustainability from the 17 SDGs. The organizers have been careful in incorporating every opportunity to mold creative talents at every single step of the event.

“The Annual Student Art Show is the result of a great amount of research. It is not easy to organize something for students. They are the new gen, and they are open to a great amount of knowledge and possibilities. We had to do thorough research on the subject and plan the event in such a way that the children find it novel and fascinating. There should be a challenge and at the same time, there should be fun. There should be information to feed their curious minds as well. The Annual Student Art Show was a careful blend of all this.” said Shiba Khan, Founder, and CEO of Funun Arts. Mohammad Huzaifa Khan was the mind behind all AV effects where he created magic with different transformations and music.

The opening of ASAS was by the youngest of the group, Maryam Sarfraz Khan and Mohd. Azaan Mehtab Khan of ages 5 and 6 respectively. Quran recitation was done by Mohd. Huzaifa Khan. One of the parents said, “The youngest were the most confident as they had no inhibitions, and this is what Funun Arts wanted to show us, parents, too. We can provide a stable foundation on which our kids can step on and walk confidently and this should start from a young age.” Khan Ayaan Abdulla hosted the event along with motivational speaker and coach, Bassam Nader and Shiba Khan, Founder of Funun Arts group.

The first day of ASAS was exclusively for the jury members who personally evaluated all the submissions and selected the best. There was the panel of four jury members Mr. Ahmed Hylouz, Mr Ahmad Al Awadhi, Samar Kamel and Shiba Khan. The jury decided to take an entire day because of the immensity of submissions. Mr. Ahmed Al Awadhi, one of the jury members said that he was astonished by the grandeur and magnitude of the event. “The creativity, skill, and techniques of the kids never cease to amaze me. They always surprise us with innovative art pieces. ASAS was an experience that made me proud of not only their talent but also their social consciousness and responsibility.”

The Annual Student Art Show was inaugurated by H.E Suhail Mohammad Al Zarooni, Chairman of Al Zarooni Foundation and Al Zarooni Group of Companies. H.E Suhail Mohammad Al Zarooni mentioned that he was amazed to see the consistent hard work and passion of Funun Arts over the years. “The younger generation learns from the elder and no wonder Youth Creative Minds shows the same spirit”, he exclaimed. He expressed his wholehearted support for Funun’s future ventures that blurs all boundaries and takes art and creativity to a new level. 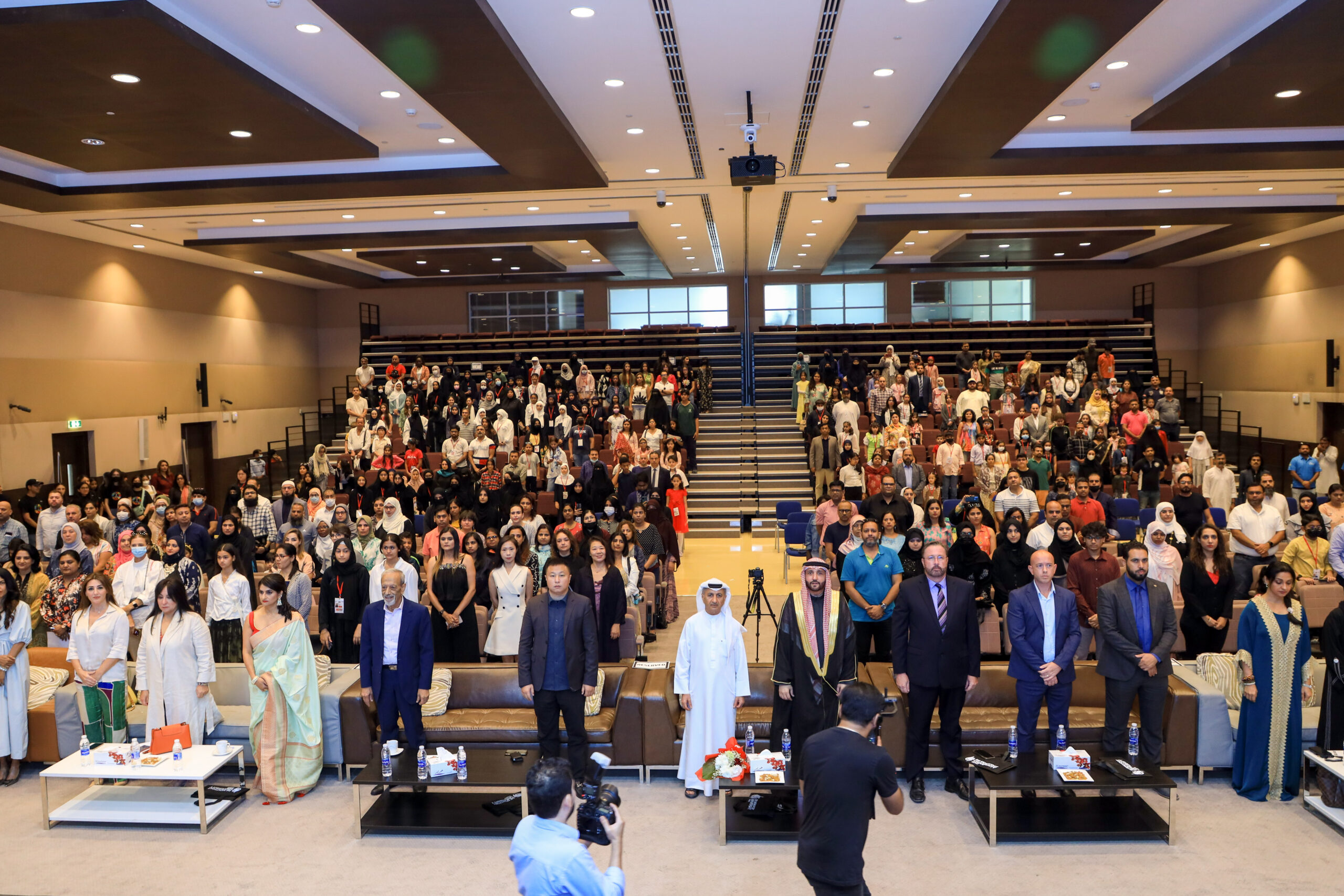 Mr. Mengbi Wang, Managing Director of Leyong Group lauded Funun Arts for this remarkable achievement and said that this is one of the most inspiring art events that Dubai has witnessed. Mr. Ahmed Hylouz expressed his immense joy in witnessing so many young talents and said that the future of art in UAE is in able hands with so many talented people and great opportunities like ASAS to shape them.

Professor Michael Gallimore, the Head of Campus, De Montfort University, Dubai said that the vision of the university is to shape the younger generation to build a better world, and organizing ASAS along with Funun Arts gave it a new dimension by blending art and knowledge. “This event not only feeds children’s intellect. It also enriches their creative thoughts which provides a solid foundation in all areas of growth,” he said.

The opening event was followed by panel discussions by experts in the art field, cultural programs, and talks by young speakers. The music concert by Team Adhyan involved 19 students, the dance performances by team Sunarthanam based on Gibran Khaleel Gibran’s “Your children are not your children…” and the performances by Sruthi Music and Dance Centre were the highlights. The most awe-inspiring presentation was by the children of determination from SNF Centre which received a standing ovation from the audience. “That was the most fulfilling moment for us. We always believed in giving equal opportunities to kids and the smiles on parents’ faces are the best reward we can get for our efforts,” said Farah Khan, Co-founder of Funun Arts.

Shiba Khan said,” This would not be possible with the strong team and Funun Arts is blessed with that hard-working team. I am thankful to all mentors for making it possible. “A dream does not become reality through magic; it takes sweat, determination, and hard work.”

Founders of YCM, Khan Ayaan Abdulla and Mohd. Huzaifa Khan said, “The way to go into the future is to look back to the past. And creativity is the catalyst to drive youth this way.” 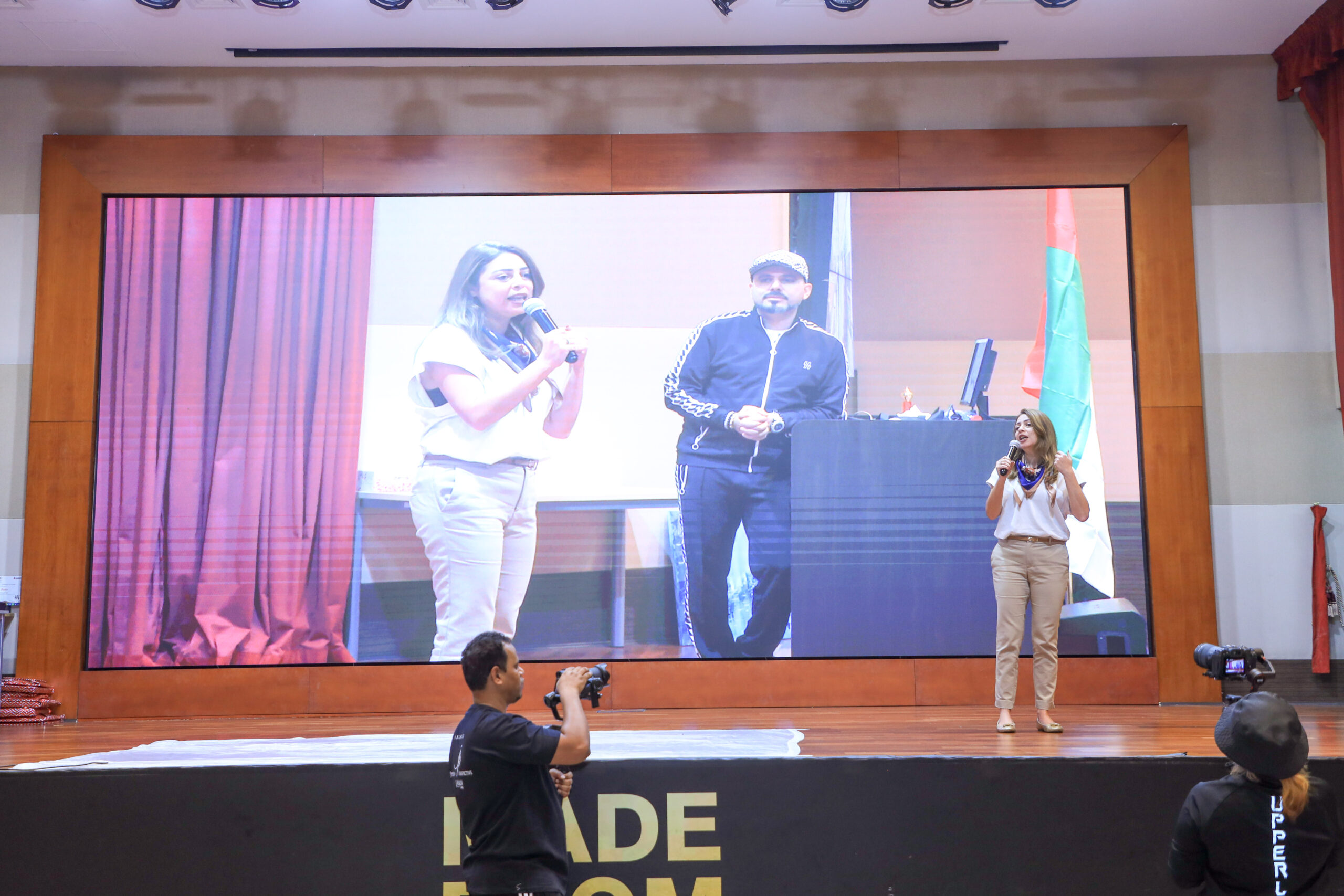 The 6th of November witnessed the union of many students, parents, mentors, and artists. The second day focused on imparting knowledge and awareness through master classes, art talks, and other interactive sessions. The day started with an art talk by mentors which was followed by a Master class by renowned artist Shrutika Gosawi. This was followed by a photography workshop by Nikon Kids Club and another Master class by acclaimed artist Yuvika Garg and Masterclass in Public Speaking by celebrity public speaking coach and motivational speaker Bassam Nader. Another art talk session by the mentors followed. 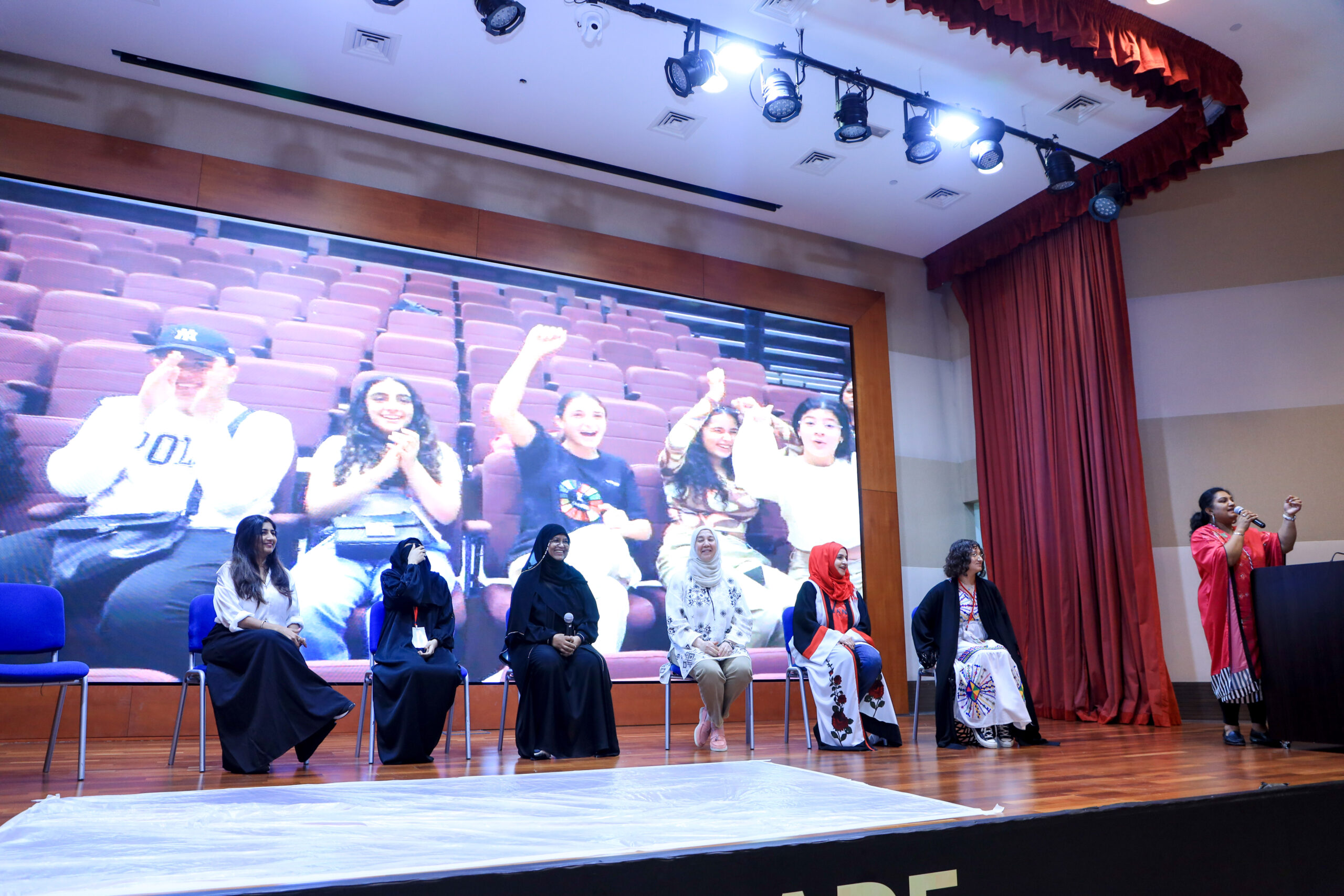 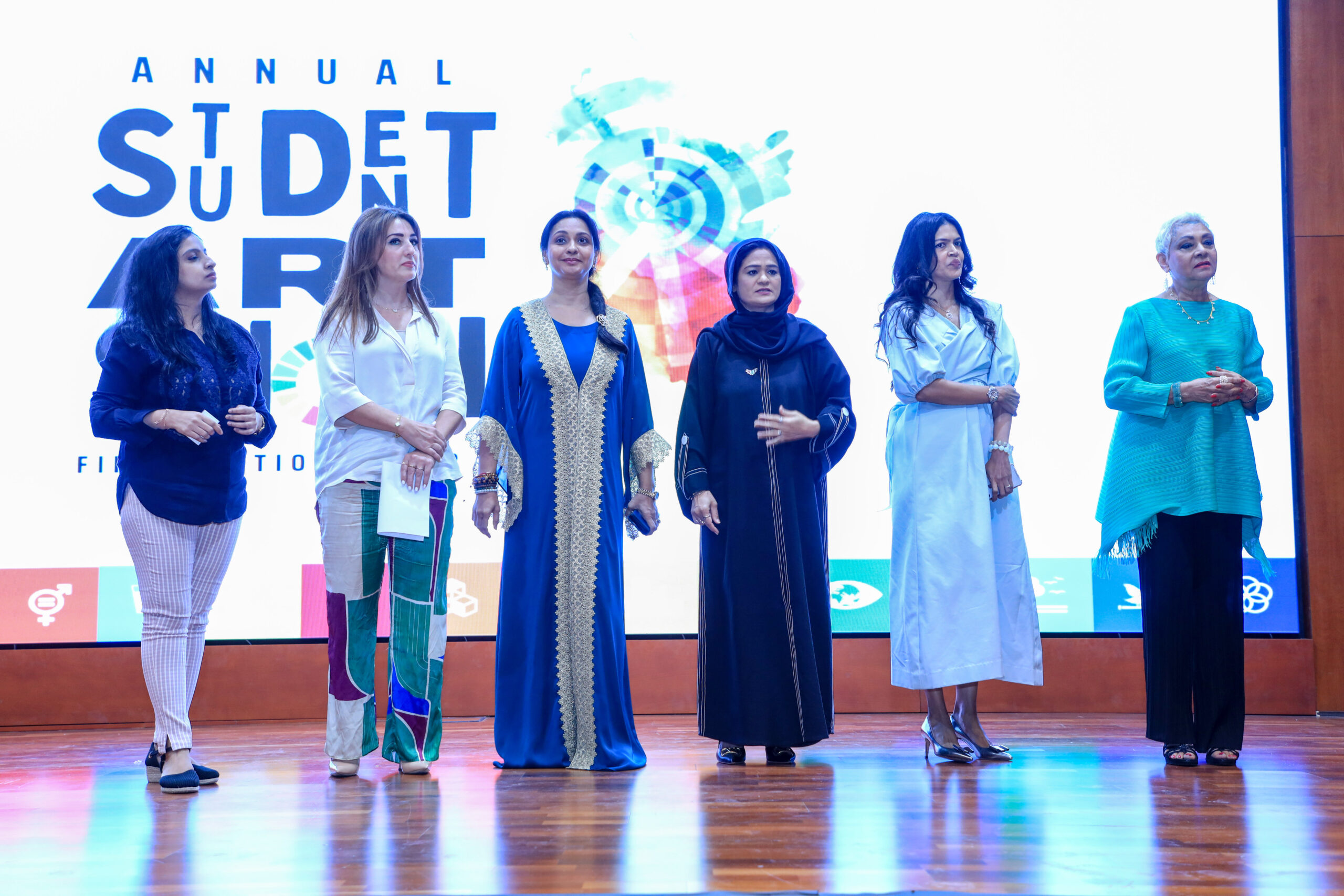 The event culminated with the prestigious award ceremony where the winners of the art competition were awarded and the dignitaries and panelists were felicitated. In Category 1, Astrid Venables, Taima Ahmad Said Ghannam, and Raghav Ganesh secured first, second and third respectively. In Category 2, Fatema Mohamed Asif came first followed by Tamara Haitem Suleiman and Logain Yousif Siddig Ali in the next two places. In Category 3, Jannatul Fardous Meghla, Kalopsia Wiz, and Rene Rodriques secured the first three places. Ian Sondos was awarded as the special winner.

Shiba Khan expressed her views on this unique endeavor calling ASAS a dream project. She also added that the team who worked hard for 4 months is the backbone of ASAS. She mentioned twenty-four mentors and De Montfort University as their greatest support in making the event a success. Ms. Khan thanked the media, creative people, designers, sponsors and partners who supported ASAS throughout.

The art gallery of the exhibition was solely made from recycled wood by Al Saqf Al Lamia Technical Services. Best out of waste was Funun’s motto in constructing the art gallery and they made use of wood and scrap from construction sites which became the best examples of sustainability. The event was digitally supported by Alif Designs. Mont Marte sponsored the art materials for the event. Nature’s Cart was the hospitality partner, Project Gateway as our supporting partner, and Light It Forward was the CSR partner of the Annual Student Art Show.

It can be well expressed by the quote:

“If four things are followed – having a great aim, acquiring knowledge, hard work, and perseverance – then anything can be achieved.”

Funun Arts is a vibrant community of art galleries, visual arts, designers, photographers, and creative brains. This is an essential platform for the emerging artists, cultural practitioners, creative entrepreneurs, and homegrown initiatives. It is a non-profit platform where artists are given an opportunity to exhibit their talents in a space that is affordable and allows them the freedom to enhance their creativity. Funun Arts Group exhibits both locally and internationally, collaborating with galleries and participating in international art fairs along with doing number of shows in UAE. Now more than five hundred multinational artists are the part of this art community. Funun Arts is a one stop solution which creates a bridge between the artists, art collectors, art enthusiasts, architects, and interior designers.

Dubai based “Funun Arts” Group showcased an art exhibition on the occasion of International...