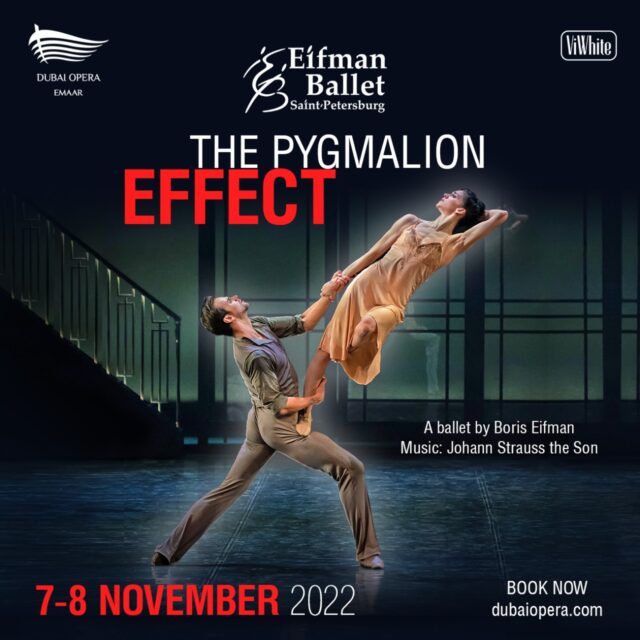 The Pygmalion Effect is Boris Eifman’s first endeavour in recent years to work in the genre of comedy or, more accurately, tragicomedy – the form which the choreographer has perfected.

As he once again finds inspiration in the world cultural heritage, Eifman offers his audience a ballet interpretation of the archetypical story of Pygmalion, the sculptor who fell in love with his creation, a statue of a beautiful young woman. In the ballet storyline the role of the tempestuous creator falls to a successful ballroom dancer who resolves to “sculpt” a virtuoso performer from a clumsy common girl. Internal and external transformation of the heroine takes place against the background of music by Johann Strauss the Son. This is the first time in the choreographer’s prolific creative career that he works with the music of the “Waltz King”.

A tireless scholar of human soul, Boris Eifman chose for the justification of the title of his new ballet a set phrase used in studies of psychology, where the term “the Pygmalion effect” is defined as a phenomenon whereby expectations influence actuality. Thus, a person will develop self-assurance and achieve success when perceived by another person to have talent.

In this production Eifman presents a comprehensive artistic and philosophical portrayal of a human personality’s remarkable flexibility and ability to undergo unpredicted change in response to set aims and aspirations.

“We are not fully aware of our real capabilities. Human nature is infinitely enigmatic. It is a space for unlimited discoveries.

Each of us possesses creative energy, which gives a human being capacity for personal development. Nonetheless, it is not rare that, to change oneself, a person needs someone else to help unlock dormant potential. By influencing others these architects of human destiny also become subject to metamorphosis.

The ballet The Pygmalion Effect is a choreographic interpretation of the myth about an artist and his creation, a new view on how art and life are intricately intertwined but never one and the same.

The central character of the ballet is an impertinent girl who lives in the slums. When she meets a champion in ballroom dancing, she enters the world of riches and remarkable mastery of performance. Here beauty and deceptive ease of movement are earned by very hard work, while seemingly attractive stage fame is not a safeguard from loneliness. Led by the famous dancer, the heroine embarks on a path of body movement transformation – what initially has been an amusing experiment, ends in a real drama.

The girl’s extraordinary tenacity and her merits previously disguised by overt crudity, as well as her spontaneous infatuation with her teacher and partner, help her develop into a star. But the fateful chasm between poverty and luxury can only be bridged in the world of dance that makes people equal whether they live in a shack or a palace. In real life we cannot escape the vengeful past that stays within us forever.

The miraculous transformation does not make our heroine happy. Harmony is destroyed along with remnants of sweet fantasies. But what is life if not a reverie brought on by the longing for an unattainable dream?..”

Gala, the dweller of city outskirts, calls on tourists to enjoy the ride in a carriage driven by her father, Holmes.

The life of Leon, a superstar of ballroom dancing, is so much more glamorous. He welcomes the arrival of a new day in his luxurious home surrounded by maids under supervision of stern Greta.

Gala is full of admiration as she watches the ballroom dancing tournament. Leon and his partner Tea are the favourites but, sadly, a mistake costs them the victory.

Gala rescues Leon from mobsters and makes it into the house of the public’s darling. Holmes, who is trying to blackmail the celebrity, also manages to get inside. Gala rushes away. Nonetheless, her introduction to the unfamiliar and alluring world leaves its mark: a dream to become a dancer and affection for Leon are kindled within the young woman.

In the grim suburbs Holmes and his drinking mates are having a wild party. Exhausted, the group goes quiet. In his dream Holmes is visited by a messenger of the Heaven, who bans his favourite pursuits – women and drink.

Gala’s appearance in the dance class causes general confusion. Leon makes a bet with the Coach – he will transform this gawky girl into a star.

Gala is subjected to a gruelling exercise routine. This is not how she envisaged her training. Her body, used to unrefined movement, resists unfamiliar plastic of dance. At a convenient moment the maids kick the hateful “savage” out of Leon’s house.

Holmes alternates between going rogue and preaching sobriety and chastity.

Leon locates dispirited Gala and tempts her with the images of her future triumph. Torturous practice starts again. But Leon’s handling methods are not working. The only solution is to resort to modern technology, which turns Gala into a mechanical dancing doll.

Tea steals the partner from one of the competing female dancers. Leon brings Gala into the dance class. Everyone is struck by her transformation, and congratulations go to the tutor whilst the pupil is ignored. The girl is filled with fury.

The support of the Coach helps Gala to recognize her own talent.

Gala and Leon make up and win the tournament. But separation is inevitable. Leon cannot forget his partner’s past. Slum dwellers pay tribute to their queen. But Gala can only think about Leon, with whom she is destined to be joined together only in her reverie…

HOW TO GET VOLUME IN YOUR HAIR