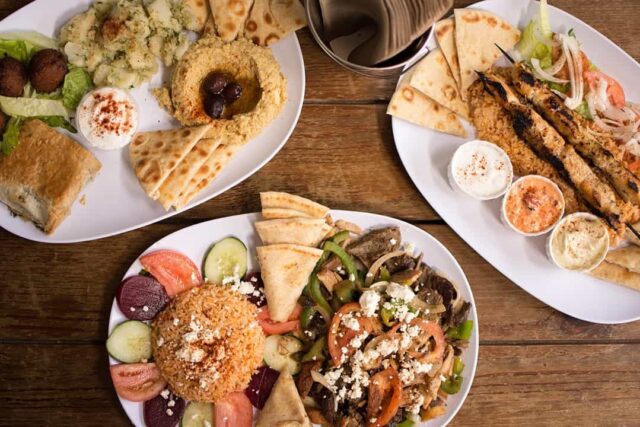 Some people travel to see the sites. Others, like us, go pretty much exclusively for the food. But while the list of culinary destinations around the globe is endless, there are certain places that really are all about eating. Here are ten trips every foodie needs to have on her bucket list.

Freshly made crepes, flaky croissants and piping-hot baguettes–no trip to Paris is complete without a daily dose of treats from the city’s spread of chic cafés, patisseries and bakeries. Order a buckwheat galette with andouillette, ham, cheese and egg from the crepe stand at the Marché Président Wilson. Next up, baguettes, which you’ll take with you on your bike ride to the Tuileries. Atthe boulangerie Poilâne, the bread is still baked in an antique wood-fired oven just downstairs. For dinner, you don’t want to miss the lamb shoulder–with a bottle of wine, of course–at Au Passage.

Fun fact: Tokyo restaurants have more Michelin stars than anywhere else in the world. And we’re talking so much more than sushi. Think steaming bowls of ramen, udon, soba andtonkatsu pork. Order the omakase menu from any stall at the Tsukiji fish market and pound sake with skewers of grilled meat at any izakaya. Queue up early (like, 3 a.m. early) for the best raw fish you’ve ever had at Sushi Dai. Then, for a taste of the upscale, be sure to score a reservation at the French-influenced Narisawa for nature-inspired dishes by visionary chef Yoshihiro Narisawa.

This is the land of El Bulli. In the wake of the famous, and now closed, restaurant by chef Ferran Adrià, you’ll find no shortage of fresh seafood, sizzling tapas, paella and sangria. See and be seen at Albert Adrià’s upscale tapas joint Tickets. Then take an afternoon and sample marbled jamón ibérico, freshly pressed oil from Catalan olives and fresh fish from fourth-generation fishmongers at the stalls of La Boqueria.

We all know that Italians take their food and wine very seriously. And while gelato, risotto and Chianti should be part of any trip, for a truly authentic experience, it’s best to dig deeper. In Florence, make a reservation at the stylish Michelin-starred Ora d’Aria, and order a heaping bowl of spaghetti with smoked buffalo mozzarella and panzanella. Head to the lively port city of Livorno for torta di ceci, a street food made from chickpea flour that’s almost like a tortilla. A short trip to Vicchio lands you at Villa Campestri–the first olive-oil resort in the world, where you can partake in tastings, get an olive-oil massage and eat a multi-course, olive-oil-laden meal, all of which comes from olives grown on-site.

Scents of kaffir lime, lemongrass, chile, mint and coconut milk hang heavy in the air here, and the sound of sizzling woks rings louder than temple bells. In Bangkok, street food rivals haute cuisine for top billing, and at the trendy Taling Pling, beef massaman curry is king. For a meal that toes the line between street stalls and high-end eats, go to local favorite Supanniga Eating Room, where you’ll drool over the best spicy crab you’ve ever tasted.

Fried-oyster po’boys, shrimp étouffée, spicy crawfish gumbo and jambalaya–these are just a few of the Cajun and Creole must-eats on any trip to NOLA. Go for French-Creole fusion in the French Quarter at Antoine’s, Arnaud’s or Galatoire’s. And don’t leave without a least a few (OK, a million) sugar-coated beignets from the world-famous Café Du Monde, which has been serving up these beloved deep-fried fritters since 1862.

The former British colony is beloved for its Eastern flavors tailored to a Western palate. Steamed dumplings, dim sum, barbecued pork buns–we’re reaching for our glass of water just thinking about all the salty goodness. Tim Ho Wan is your answer for buns, and, oh yeah, it also has a Michelin star. Head to The Chairman for steamed flower crab and braised bean curd with Chinese mushrooms. Of note: The chef here has banned MSG from his kitchen, so you might as well make it a double order.

In 2014, Noma was named the best restaurant in the world, and its chef René Redzepi became something of a food god. You’ll be hard-pressed to get a table here, but luckily, the Danish capital has much more to offer in the way of culinary treats. If pickled herring is too fishy for your taste, try a smørrebrød (the fancy Danish word for an open-faced sandwich) from Aamanns instead. We suggest the pork rillett with thyme, mustard, pickled squash and gooseberries. Wash it all down with a few brews from the world-famous Mikkeller Bar.

With a mash-up of influences (France, Africa, the Middle East), the food in this Moroccan city is nothing short of eclectic. Less touristy and more authentic than Marrakech, the narrow alleys of Fez’s medina are lined with colorful spices and clay pots. Learn to prepare classic Moroccan dishes–harira soup, Berber pancakes, tagines–at one of the many cooking classes on offer at Café Clock. Then reward yourself with a meal of salads, tagines and couscous at Maison Bleue.

Long known as a culinary destination, Oaxaca is much more than the fish tacos symbolic of Mexico. Instead, think complex moles, soups, tamales and giant tortillas (or tlayudas). Order the huitlacoche crepes in poblano sauce at the upscale Catedral, and try a pastry cone stuffed with hibiscus flower at the trendy La Biznaga. And OK, you have to at least try fried grasshoppers (or chapulines), a tradition that dates back to the 16th century.

How to Keep Your Wife Happy

We Make Custom made Documents for ones Academics Demands