Wearing a bikini is no big deal for Alia Bhatt. She was seen in a sunny yellow two-piece in her debut film, Student of the Year. But her Shandaar director, Vikas Bahl, was clear he didn’t want even an ounce of puppy fat. And the obedient student that she is, lil’ Ms Bhatt took to cardio with a vengeance, topping it with hours of weight training. And within weeks, the 21-year-old actress presented herself to Vikas, looking like a “little boy”.

Aghast, he ordered her to go get some curves, immediately. And Alia signed up with trainer Yasmin Karachiwala, who promised her that with a new diet plan and daily routine of aggressive pilates, she will bowl over her co-star Shahid Kapoor. “Alia came to me last July and told me that she wanted to looking sizzling in a bikini for Shandaar. She was skinny but dedicated, refusing to eat anything but what had been recommended. And in three months she had the perfect body for the UK shoot, going from super-thin to gymnast body-thin,” informs Yasmin, adding that she stopped Alia’s cardio routine, then worked on her abs, arms, back and legs.

Alia, unlike Malaika Arora Khan and Deepika Padukone, usually goes off her diet and workout once the film is done but in this case, even after wrapping up the bikini shoot in Leeds, she’s been training intensively for her next film, Udta Punjab.

“Apart from the coraline and trapeze, she has started working with the ‘arcus’, which is a big bow suspended in midair. This week, we will also begin with a superior form of exercise called the ‘bodhi’. I’m presently working with an instructor from the US to understand the machine better, since this is the first time it will be used in an Indian fitness studio,” says Yasmin, admitting that Alia is now a gym-addict. “She’s young, hyperactive and always ready to try something new. There are days when I have to throw her out of the gym and tell her to cheat on her diet.”

Alia agrees, saying she’s in a long-term relationship with buddy Yasmin and fitness. “Pilates is new and challenging,” she asserts. “Consistent training should help me reach my goal. I know I will get there soon, I just have to learn to be patient.” 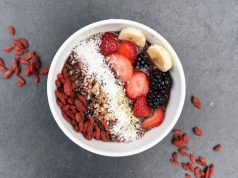 Some Healthy snacks you must always keep handy – Mukta Tolani

These Ancient Japanese Secrets Will Help You Look Younger

Dubai artists shine a ray of hope throughout the holy month...

Qubit Life For The Future